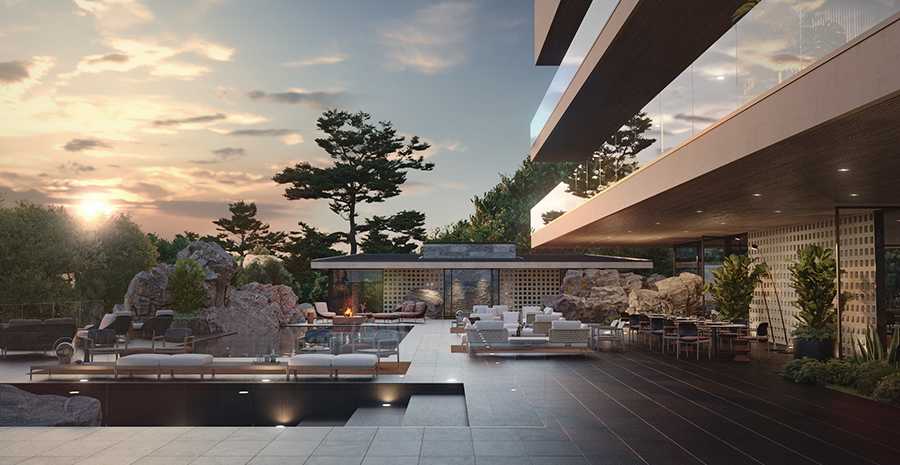 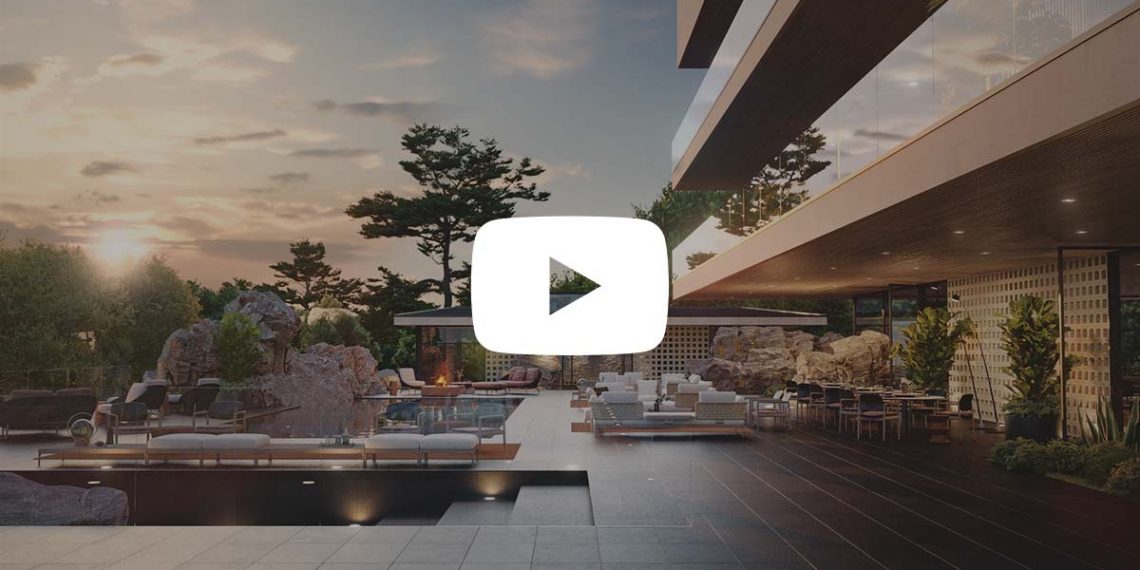 As happens each year, Minotti presents its concept of contemporary living in residences and Hospitality facilities with a new, exclusive virtual project, to sum the spirit of the brand: the dialogue between furnishings and architecture, indoor and outdoor spaces, represents the basic concept behind the 2022 Collection. The result is the “Waterrock Boutique Hotel and Villas“, containing areas for socializing (the Ishi Bar, the Mizu spa and the Oleander Grill) and three different types of villas immersed in the landscape (Lotus Tree, Maple Tree and Cherry Tree): fascinating settings that host the furnishings of the 2022 Collection and reveal new creative horizons of forms, imaginaries and cultural references from all over the world.

The surprising welcome of Horizonte

The sartorial quality of Goodman

With its clear reference to the 1970s, the new Goodman seating system by Rodolfo Dordoni has the distinctive feature of matelassé quilting, typical of the sartorial craftmanship of Minotti, as well as the advanced technology of pocket springs combining with the layer of variable-density polyurethane padding that offers a clear sensation of softness and coziness. The system is raised off the ground and enhanced by a border frame in bronze-color or polished chrome metal.

The freedom of Twiggy

Twiggy by Rodolfo Dordoni embodies a new language of togetherness, free from preset schemes, ready to adapt to various requirements of space and use. The design stems from the individual chair in the Small, Large and Deep versions, with or without armrests, enhanced by fine stitching. A chaise longue, a couch and three benches in different sizes are also available, for total flexibility of configuration. The upholstery can be leather, nabuk or fabric, while the base is available in semigloss polished aluminium, or the glossy Black Coffee finish. 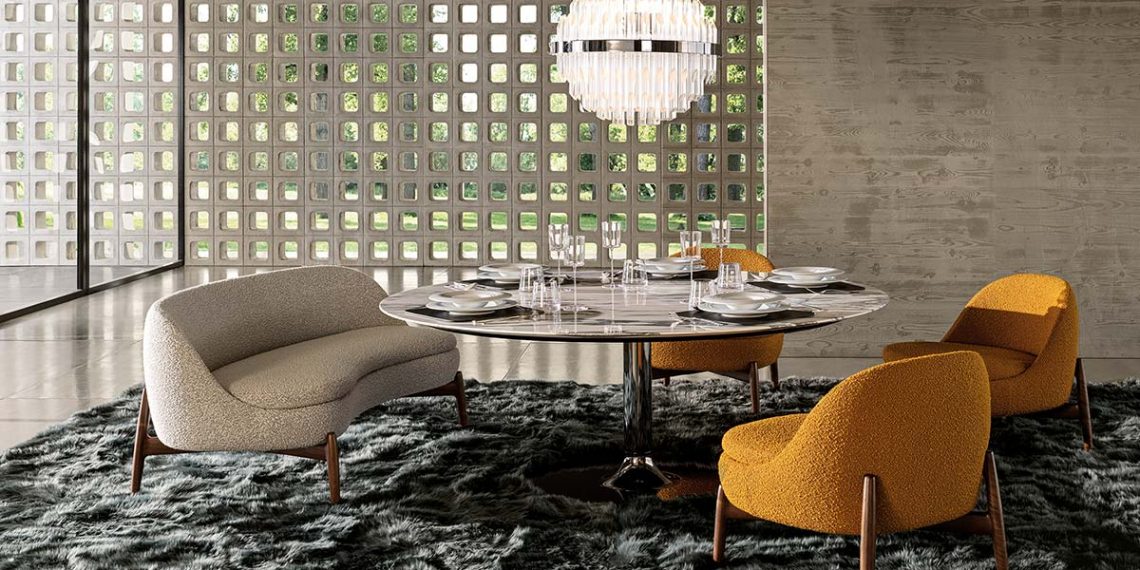 The compact silhouette and refined details of Sendai

Japan and Denmark join forces in the Sendai project, a new family of upholstered furnishings by Inoda+Sveje, in the 2022 Collection together with the Yoko and Lars seats, also by the Japanese-Danish duo of designers. Named for the Japanese city of trees, Sendai is composed of a small sofa, an armchair, a lounge armchair and the little armchairs lounge and dining. Thanks to the lightness and simplicity of its lines, Sendai offers a new, more intimate way of interpreting living space, also in Hospitality structures. The enveloping padded shells, compact and well-proportioned, are supported by slender, polished legs in light brown stained solid canaletto walnut or liquorice-colored lacquer on ash, showcasing the company’s woodworking skill. The armchair, dining and lounge chairs come in a 360° swivel version with return mechanism. 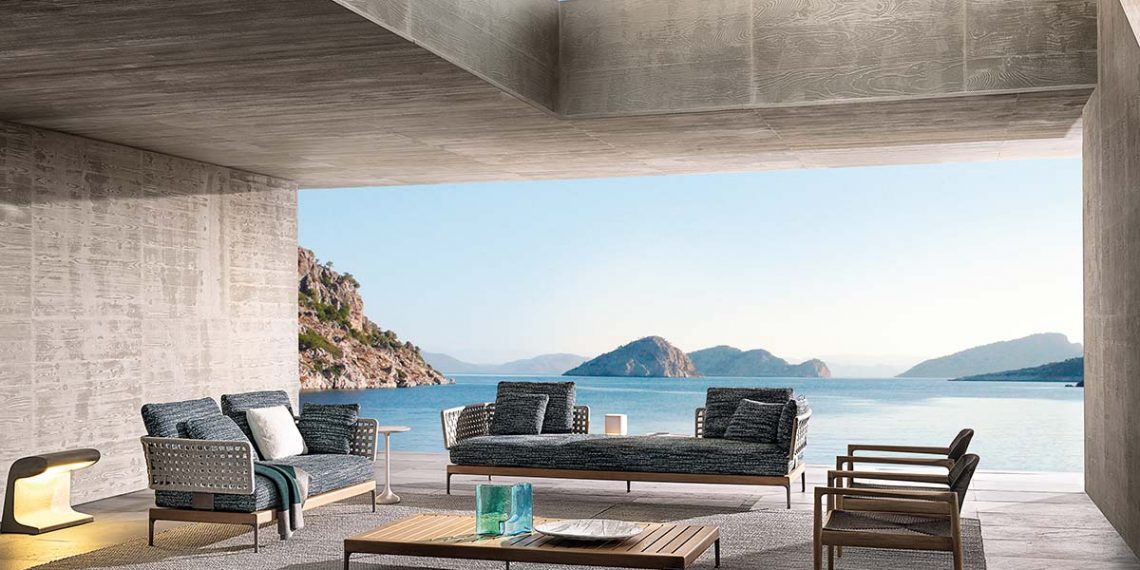 The 2022 Outdoor Collection designed by Rodolfo Dordoni, GamFratesi and Inoda+Sveje with Minotti Studio is composed of elegant, comfortable furnishings created to enhance gardens and terraces, in continuity with interior decor. Among the most distinctive furnishings, the Yoko Cord Outdoor family of seatings by Inoda+Sveje, interpretation of the Yoko chair; these pieces are joined by the Patio Teak sofa by GamFratesi, the Belt Cord Outdoor seating by Rodolfo Dordoni, and the evolutions of the Lido Cord Outdoor (GamFratesi) seats, as well as many refined furnishing complements. The color palette of the 2022 Outdoor Textile Collection suggests the warm hues of the earth, neutral tones like sand and livelier hues still connected with nature, worning with elegance by the new upholstered seats.